A Brief History of Treya

You don't even need to look at your map; the library is the most prominent building in the square - rivaled only by Illusia's Temple. It is also one of the few not draped with colorful banners. Built into the side of the keep's outer wall, the library's entrance features five enormous pillars of white jade lining the edge of a corridor. A stained glass triangle tops the pillars displaying Illusia's symbol - an open book with light spiraling up from its pages. Inset from the pillars, are four more panels of stained glass depicting stylized images of Illusia, light, water, and Viv, from left to right. Wide arched steps invite you inside. Once inside the library, you notice various columns dotting the outer edges of its soaring interior, and realize these have mirrors inside them directing light at the large spherical mirror (created by multiple convex plates fitted together) at the library's center. Another pillar extends from this mirror to the ceiling. This central sphere lights the entire interior by day. Reading some notations on your map, you understand docents remove the reflective covering from the sphere at night to light a fire inside. While smoke billows up through the central pillar, the plated lenses diffuse light throughout the library. Aurora Library's roof is part of the upper battlements, and at night, lightsmiths gather to bend the sphere's firelight shining through the stained glass into what looks like an aurora borealis in the skies above.

Onset of Fall, Year 1867, Viv's Age "The Fracture took much from the human race. We managed to defeat Ravenna, but it nearly cost our enslavement. During that time, when scattered villages tried to pick up the pieces, fighting with one another to carve out their own kingdoms, so much knowledge was destroyed. Illusia was right to prize knowledge so highly; our race has been broken ever since. So, when I discovered Prismere Isle with such a wealth of knowledge preserved, I used it to unite the human kingdoms under one banner as of old. When the last straggling human kingdom joined me, our race regained the right to stand among the elf and dwarf kingdoms. Knowledge is the pathway to achieving our goals! So, as citizens of Prismeria, I give you access to all the knowledge humankind has gathered - here, in Aurora Library!" 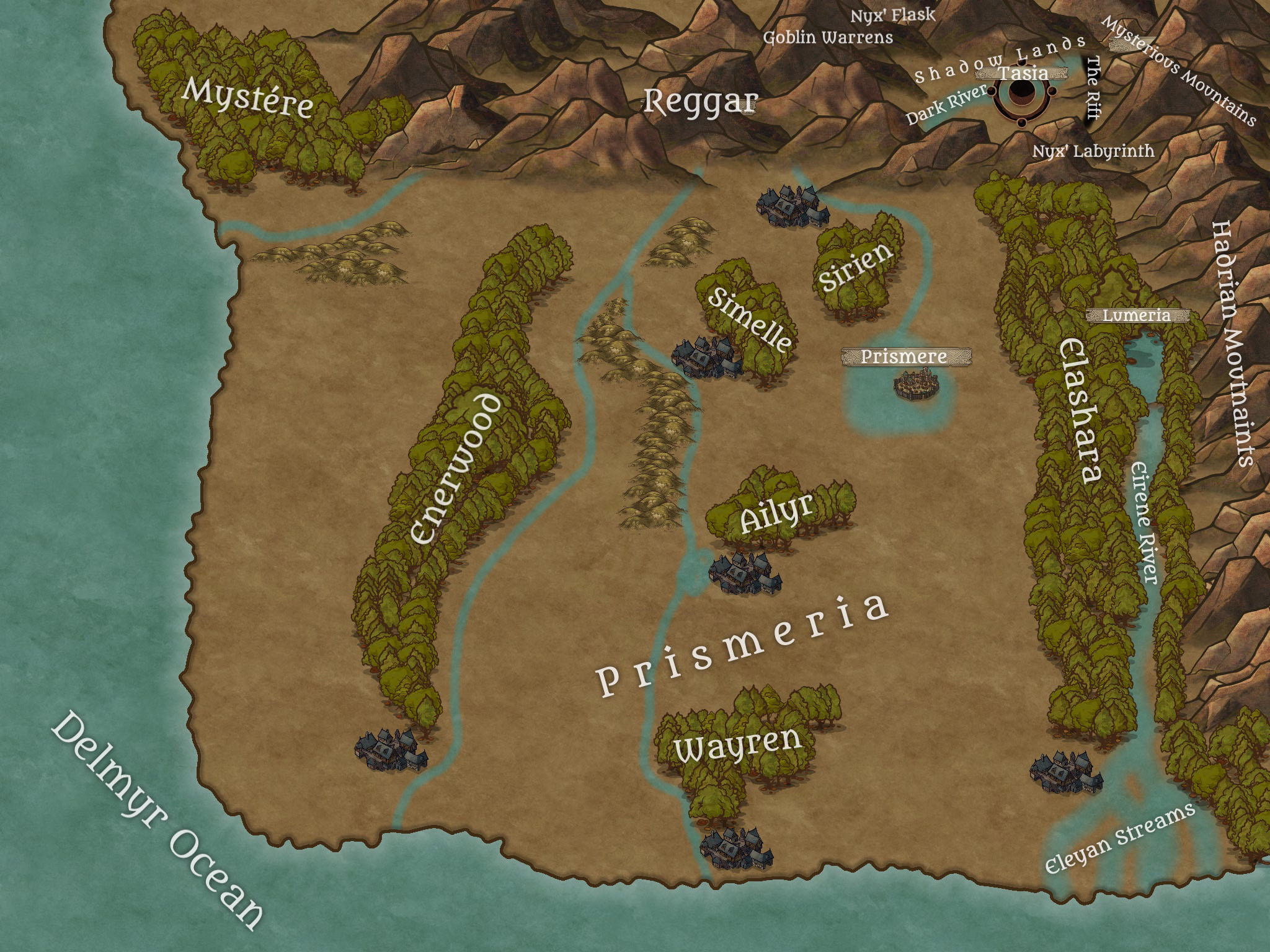 There was a time when many refused to serve the great god Viv. It was a time of war and chaos, blood and mourning. To save the races from extinction, Viv exiled those who rejected him, preserving those who worshiped him on Treya. We humans are among the blessed and have escaped the death and destruction raging on the rest of Tirien. Our one thorn in the side to peace is the sorceress Ravenna, who serves Nyx, Goddess of Night, Viv's enemy.

There are a number of races living on Treya, each blessed with a gift from the gods.

You can find out more about the blessed races' gifts at the Temple.

Nymphs are comprised of three subraces: According to old reports, the nymphs used to be a single race, not split into three subspecies. These nymphs were able to commune with water, trees, and rock, and have come to be called trinal nymphs. Based on certain observations, it is suspected that Ravenna may be one such, though it would indicate a serious break between her and her people, as nymphs would never serve Nyx. These same old reports imply that trinal nymphs who chose to serve Ravenna took the name "fae." Nymphs claim to serve a god named Lux, and thus, oppose Ravenna and the blessed races. Viv and the blessed races killed Lux centuries ago, driving the nymphs to shelter in their last city, Lumeria. They still refuse to serve Viv, claiming to serve this dead god. Lumeria resides within Elashara, the eastern-most elven province. Royalty within the blessed races often take a nymph slave whose subspecies is easy for their race to deal with. These slaves tend to various court duties. Dwarves take oreads as messengers with other servant duties; elves take naiads to tend to their elaborate gardens and duties; and humans take naiads to tend their water supply and deliver messages.

Rarely seen, or even thought of, are the hidden races - those who neared the brink of extinction before bargaining with one of the blessed races for safe haven.

Rarely seen by any but dwarves, goblins live in the Goblin Warrens on the outskirts of the Shadow Lands. Little is known about them, as they require a gas (possibly known as noxion) to breathe. Their warrens are filled with it, making them virtually uninhabitable by any other race. It is thought their racial ability lets them see better in the dark. This race worships Nyx and serves Ravenna.

Those serving the Raven Empire, Ravenna's kingdom, call themselves Renn. While Renn are not technically a race, they are often referred to as such. In fact, they are comprised of many races:

Dragons have long been extinct, thought by most to be myth. However, the skeleton discovered and displayed in Drakmar proves they did live at some point. We are creating a replica of the skeleton for display in our Dragon Vault (a room attached to Aurora Library). Dragonlore happens to be one of Queen Sarsetta's favorite pastimes; her parents were highly interested in the topic, and helped establish Drakmar as a kingdom. Drakma - the name given to the discovered dragon - stretches 15 [feet] from nose to tail, its tail half the length of its body, resembling a snake-like lizard. Two twisted horns protrude behind the ear openings, and bone ridges line the center of its serpentine back. Two wings - similar to a bat's structure - give the beast flight. Fangs and claws paired with its size and flight made dragons a formidable foe. Until we finish the Dragon Vault, you can glean more information from the dragon scholars of Drakmar.

A Brief History of Treya